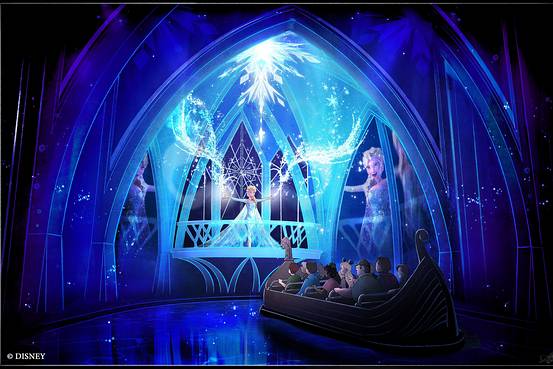 ‘Frozen Ever After:’ An Exclusive Look at Disney’s Upcoming Attraction – Speakeasy – WSJ.

“Disappear! Disappear!” Well that’s exactly what the Maelstrom attraction did. The words uttered by the trolls in the Norwegian pavilion attraction will no longer be heard. In it’s place will spawn a new “Frozen” inspired attraction called “Frozen Ever After”.

Rumors for this attraction began around the time when the princesses of the movie were housed in EPCOT’s Norway pavilion. To tell you the truth my first thought watching the movie, Frozen,  was that I could see them making the Maelstrom attraction “Frozen” inspired. I whispered this to my wife as I was watching the film but was only half kidding. I’m not entirely sure that the theater wasn’t bugged and someone stole my idea. Hmmm…I could have been rich. But seriously, I had no idea that this would come to fruition. Disney is always stepping up efforts to improve and update attractions in the parks. For instance, when they changed The Seas to feature characters from the movie Finding Nemo.

So even though I was not the “first to pass this way” or the last, I’m saddened at the fact that I’ll no longer see those trolls sending me back over the falls. Although I like Frozen, I’m not as big of a fan as most people seem to be. There is no doubt in my mind that this attraction will require a FastPass. The line for Maelstrom was out of control, at times. Now that Frozen will officially hit EPCOT next year, the Norway Pavilion will never be the same.

What do you think of this change?

This radio station is considered a "hobbyist" and is in no way commercial in nature. The music played here is for the intended use under section 107 of the copyright law.